Here at MÜHLE, we are dedicated to providing the perfect shave for all of our customers. This means that as well as creating classic double-edged safety razors, we also partner with Gillette to supply our beautiful razors in both Mach3 and Fusion cartridge models. Whether it be personal preference or ease, Gillette cartridge razors remain a favourite for many. Therefore, after our recent razor blog exploring the difference between types of double-edged razors, we’d thought we’d delve further into the MÜHLE range and compile the ultimate razor guide: DE razor Vs Mach3 Vs Fusion! 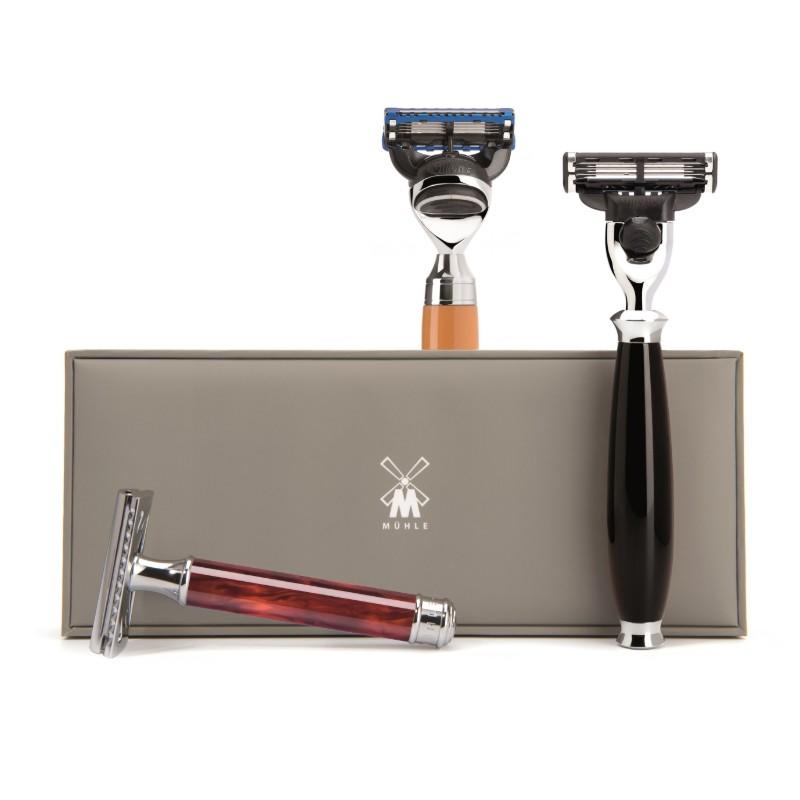 A MÜHLE classic, the traditional safety razor is formed of three parts; the handle, top and bottom plate with a blade sandwiched between the two. Once the technique is mastered, the DE razor is renowned for its exceptionally close shave. Available in both open and closed comb, the design of the bottom plate controls the blade exposure and closeness of the shave with open comb providing a closer, more direct shave ideal for those with thicker hair. The MÜHLE R89 closed comb is widely considered one of the gentlest DE razors on the market making it an excellent choice for both novices and pros alike. Great for sensitive skin, the single blade generally causes less irritation through demanding fewer passes. Plus, cheaper by far compared to the cartridge razor (replacement blades for a DE razor are only £2.50 for a pack of 10!) it’s hard to see how the cartridge razor could compete.

The DE Safety razor is available across all MÜHLE sets and ranges. 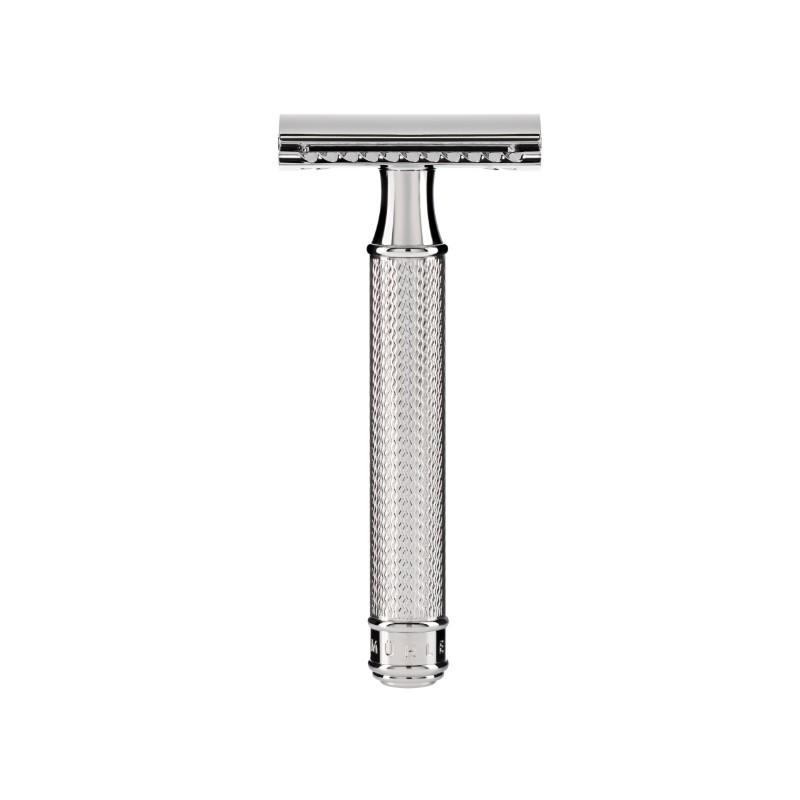 Offering a clean, effortless shave the Mach3 was one of Gillette’s first multi-blade cartridge razors. Consisting of three anti-friction blades and microfins that help to stretch the skin, the razor also features a small lubrication strip for a smooth shave. Readily available from retailers everywhere and in special variants such as Mach 3 Turbo power, and Mach 3 Sensitive power, it’s no wonder that the Mach3 is one of the most frequently used shaving systems in the world.

The Mach3 cartridge razor is available across RYTMO, VIVO, KOSMO, STYLO, PURIST and SOPHIST ranges as individual items and sets. Also available with chrome stand for Mach3 and Fusion razors. 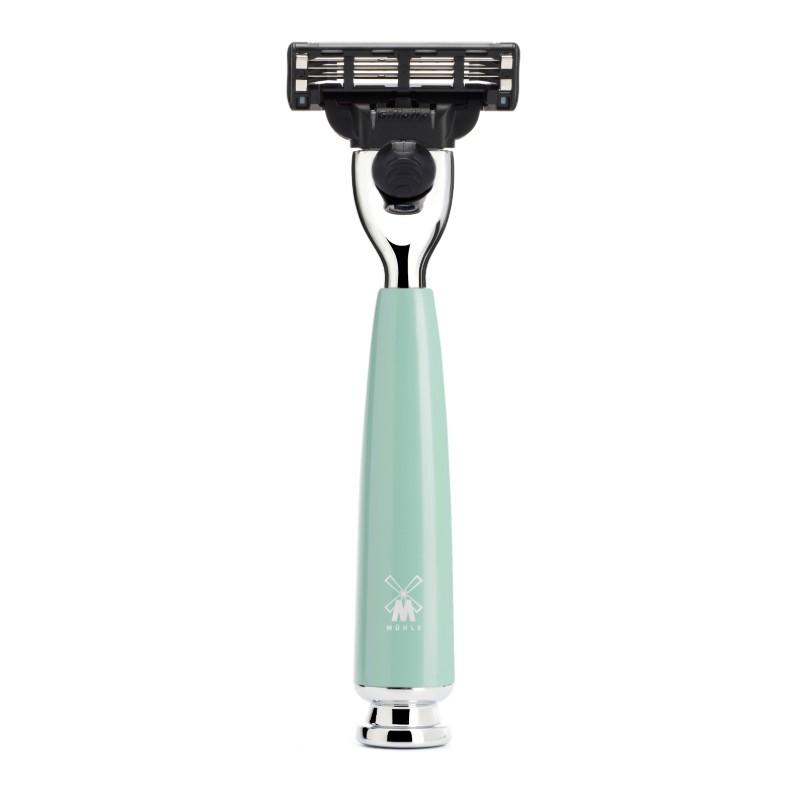 Slightly more expensive than the Mach3, the Gillette Fusion features five blades over the three of Mach3. Allowing for a closer shave, the additional blades do have their benefits and it shouldn’t come as a surprise that many claim a better shave from the Fusion. If, however, you have particularly sensitive skin this may not be the choice for you. Passing the skin five times instead of three or even once, the extra blades of the Fusion tend to make it less suitable for those who suffer from razor bumps or neck irritation. Another downside of the Fusion is that whilst the larger head allows for a quicker shave, some also find it harder to control than the Mach3, with many finding the blades clogging quicker due to the smaller blade spacing. Like the Mach3, however, the Fusion is available in special variants such as the Fusion Proglide. Complete with Flexball technology, some of the handling issues present with the standard Fusion model are eliminated.

The Fusion cartridge razor is available across RYTMO, VIVO, KOSMO, STYLO, PURIST and SOPHIST ranges as well as EDITION as individual items and sets. Also available with chrome stand for Mach3 and Fusion razors. 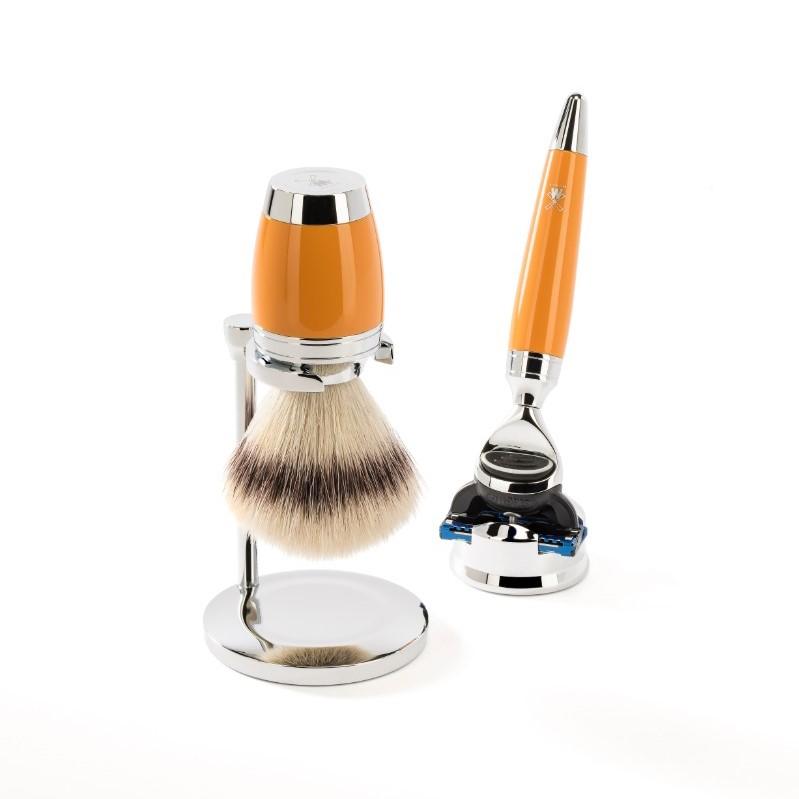